Derek Underwood hailed from Bromley and played his career for Kent and England. He finished his career just three shy of three hundred Test wickets; when that really was quite the milestone. An exceptionally canny and wily operator he claimed he simply bowled line and length until the batsman made an error; as they all will eventually. In fact this was an extremely modest claim, his control was legendary, some even declaring that he wore a hole in the pitch because of the ball landing in the same spot delivery after delivery.

Derek Pringle played for Essex despite not being born in the county. He also played for England despite not being born in the country; he came into being in Nairobi in Kenya. It might be unkind to state that his method owed quite a bit to Underwood’s idea of simply waiting for a mistake. His test haul being the far more modest 70 wickets. Oddly enough for an alleged all-rounder he scored an average of only around 15 runs per innings in Tests; barely higher than his Kentish namesake.

Yet for me, having been a trifle too young to witness Underwood playing, it is the sight of Pringle bustling in that brings once more the bittersweet tang of nostalgia.

So now the check-list of similarities is complete; The forename: The batting: The unlikely medium-pace (one ought have been faster, the other slower): and finally their run-ups to the crease; both these two beauties fairly bustled in. 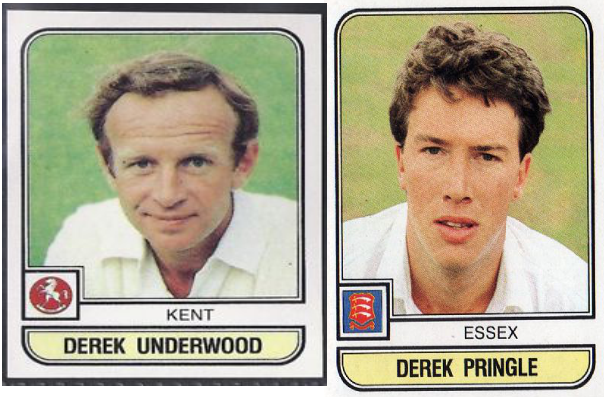 Today I wrote from 15:55 to 16:05 prompted by ideas here. My other writings here. All my prompted writing here, and my tweets here